The 2022 Louisiana TBF Junior State Championship was held March 12th on Lake Caddo in Oil City, LA. With 70 teams participating, the top 7 teams will be advancing to the TBF Junior World Championship to be held July 27-29, 2022.

Due to cold temps with strong winds and frozen precipitation the night before, the morning take-off was delayed until 8AM. Many of the boats were unable to even open their rod boxes or glove compartments because everything was frozen. Little Buddy heaters were used by some to thaw things out. Very unexpected weather conditions for Louisiana but these junior anglers toughed it out.

At the end of a very tough day of fishing, only 16 teams brought fish to the scales. Jake Weaver and Kaleb Horn brought an impressive five fish limit with a total weight of 22-14 taking first place. In second place, with another great bag of fish was Levi Joyner and Matthew Mccarthy with 18-15.  Eli Still and Gage White took 3rd with just two fish that weighed 10-13. Eli and Gage also took Big Bass honors with a 6-06 big fish. And taking 4th place was Seth Nugent and Mason Hicks with 5-15. Lane McCullough and Kole Green came in 5th place followed by Brody Meador and Lucas Cox in 6th place. In 7th place was Tucker Beatty and Jack Jayroe. For full results CLICK HERE. For more photos of this event CLICK HERE 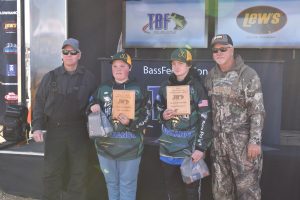 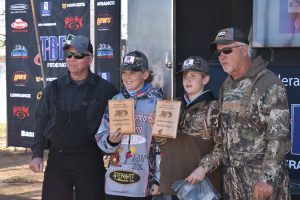 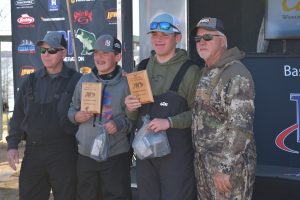 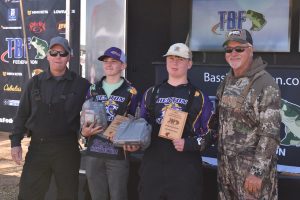 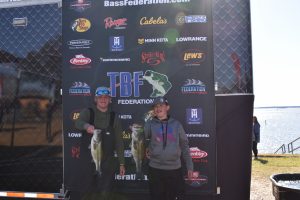